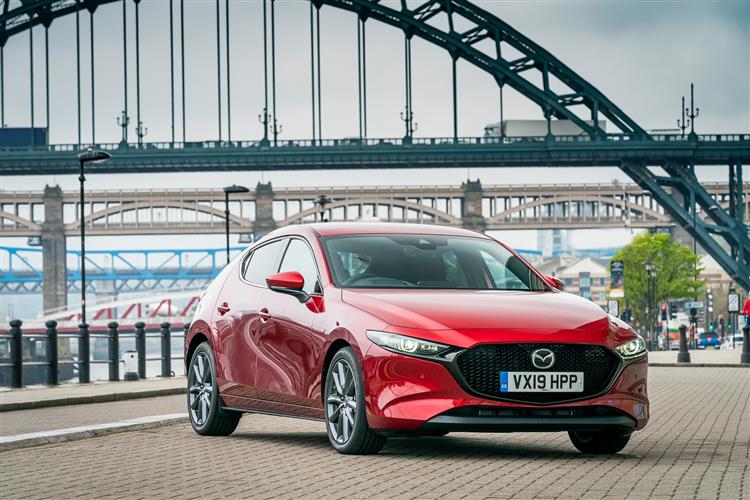 The Mazda3 is a car that has underachieved. The latest version looks set to comprehensively rectify that issue. Jonathan Crouch reports.

The development engineer who led up the project to create this car, Kota Beppu, says the MK4 version of this Mazda3 will appeal to 'free spirits'. The sort of person perhaps who might want something stylish and interesting in this class but doesn't want quality or engineering compromises. Think of a car of this type as good to drive as a Ford Focus, as good inside as a Volkswagen Golf and as good to look at as an Alfa Romeo Giulietta. That's what Mazda was aiming at. So many other brands have started out in this sector with similar objectives but we can't help wondering whether this Mazda hasn't nailed them here.

Mazda has put a great deal of effort in developing the sharp driving dynamics that characterised the previous generation model, though a relatively porky kerb weight - 1,439kgs even in the base petrol version, doesn't help here, nor does it really fit with the whole 'Skyactiv' 'less-is-more' ethos. Overall, we think the Mazda3 in any form is one of the best handling family hatch sector cars you could choose. We'd take it over a Ford Focus; it's that good. And it has the slickest manual gearbox of any car of this kind you could choose. Automatic transmission is optional, but for goodness sake try the stick shifter before you stump up for a self-shifter. Mazda is offering a choice of two petrol engines. Most sales will be based around either a 122PS 2.0-litre Skyactiv-G petrol unit (now a mild hybrid). The second option is the brand's more advanced Skyactiv-X Spark Controlled Compression Ignition engine, a 180PS supercharged unit which runs on petrol but uses a combination of spark ignition and compression ignition to deliver, Mazda claims, the driver appeal of a petrol unit along with the fuel efficiency and torque of a diesel. This Skyactiv-X powerplant is able to switch from compression ignition, which best suits day-to-day driving, to a form of spark ignition, generally when the engine is started from cold or the driver demands maximum power at high revs. The 'X' engine comes paired with four wheel drive for our market, but as you might expect, the cost of all this technology makes it a pricey choice.

The Japanese have finally realised that a car of this kind really has to visually stand out - or Mazda has anyway. And sure enough, the hatch and saloon versions of this fourth generation Mazda3 will certainly make an impression in a car park full of Focuses, Astras and Golfs. The company's ridiculously-named 'Kodo' design language has been evolved into something really elegant here, with a low nose, elegant panel shaping and a sloping roof line that flows neatly into the rear screen. It's quite different from the angular styling of a comparable Ford or Volkswagen and could be almost said to have a 'premium' feel. The interior is even better. There are smart materials crafted with interesting design and button clutter has been well and truly banished. Does any car in the class have a better cabin that this? That's a bold statement but the Mazda designers have set an impressive standard here. It certainly makes the cabin of a Ford Focus feel pretty low-rent. One of the brand's problems in recent years has been the provision of rather small centre-dash screens but in this case, there's a big, clear 8.8-inch display on top of the dash nicely angled towards the driver. And there's a lower rotary controller for it so you don't have to stab away at inexact touchscreen functionality in the kind of way that's necessary with many rival set-ups. We're not quite so impressed by the level of interior space. There are much bigger rear seats in this class and the boot is smaller than before, offering just 351-litres of space in the hatch (or 450-litres in the Saloon) - not much for a car in this class.

The 2.0-litre Skyactiv-G petrol unit has cylinder deactivation which switches the car to a couple of cylinders under light-to-mid throttle loads. Plus the 2.0-litre Skyactiv-G variant incorporates Mazda's 'M Hybrid 24V' system. This mild-hybrid set-up improves fuel economy by recycling recovered kinetic energy. A belt-driven integrated starter generator (ISG) converts the energy in the 600kJ lithium-ion battery, while the DC-DC converter supplies it to the car's electrical equipment. As a result, this mainstream petrol unit manages decent WLTP figures - 45.6mpg on the combined cycle and 136g/km of CO2. The alternative 180PS Skyactiv-X unit is based on the same 2.0-litre normally aspirated mild hybrid Skyactiv-G powertrain. But it can run far leaner than any ordinary petrol powerplant ever could, improving efficiency by up to 30% over the Skyactiv-G, helped by a supercharger which ensures that there's enough air for the clever 'Spark Controlled Compression Ignition' system to function. The result is a set of WLTP fuel and CO2 readings that should better those of many conventional diesel models in this segment. Think up to 52.3mpg and 122g/km. From a powerful 180PS engine; have cake - eat it. It's as simple as that. This comes courtesy of a ground-breaking 'SPCCI' 'Spark Controlled Compression Ignition' system.

Mazda's been bold with this car and we can't help hoping that this strategy will pay off. This is a model that's never achieved the success it really ought to have had - but deserves to now. True, it may not be one of those family hatchbacks that grab you on first acquaintance, but the longer you spend with one, the more you appreciate the depth of thought that's clearly been put into the design of the things that matter; like the classy cabin, the exemplary infotainment system and the hi-tech equipment. True, it's not the car you'd choose if family practicality was a priority. Aesthetics have clearly been prioritised here; that sloping roof does affect rear seat room and boot space. But the stylised lines that come with that swept-back silhouette will probably make you feel good about switching to a Mazda3. And that could matter more.

This deal is a stock offer. The specification for this vehicle has been pre-selected.