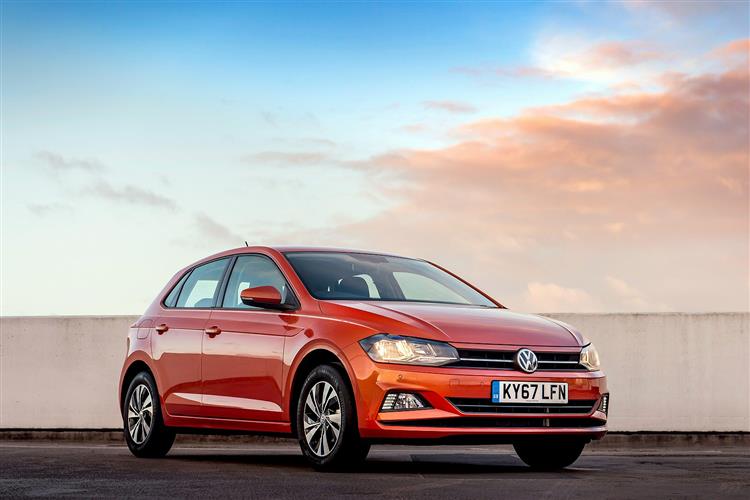 The sixth generation AW/BZ-generation Volkswagen Polo supermini, first launched in 2017, turned out to be cleverer, smarter, classier and certainly more charismatic and confident than its predecessor. But it faced tough competition. It's the early 2018-2020-era pre-facelift models we look at as a used buy here.

The sixth generation AW/BZ Polo design, launched late in 2017, was a very big deal for the brand - in more ways than one. For one thing, it was by far the largest Polo to date - far bigger for example, than earlier Golfs. For another, its sales significance remained huge for the Wolfsburg maker, given that almost 10% of all the cars the company had ever made had been Polos. This MK6 design faced intensified supermini segment competition, primarily from the 7th generation Ford Fiesta but also from contenders like SEAT's fifth generation Ibiza, car which shared this one's sophisticated Volkswagen Group MQB A0 architecture. That platform facilitated the increase in exterior dimensions we mentioned and provided for what was claimed to be a more sophisticated 'big car'-style driving experience.

Volkswagen doesn't mess about too much with the fundamental aesthetics of its core models. Just as a Golf should always be recognisable as a Golf, so it is with the Polo. Yet within these constraints, it was also necessary to move the design of this car forward. Volkswagen said the styling of this 'AW/BZ'-series sixth generation version was more 'masculine' and - whisper it - even a little 'charismatic'. It was certainly bigger - about the same size as the fourth generation Golf that was sold by the brand until 2003. With the MK6 model, this five-door body style was the only one on offer, the three-door version having been consigned to history after a production run of 42 years. As soon as you get in, just as in a Golf, you'll sense all the hallmarks of a really well made car, with the same glass-fronted 8.0-inch 'Composition Media' infotainment touchscreen you'd find on Volkswagen's larger family hatch dominating the dash. In place of the somewhat old fashioned vertically-stacked dash of the previous Polo, a more horizontally-orientated design was based around a central fascia panel that positions all of the key controls on a higher plane that's more in your direct line of sight. And in the back? This sixth generation model's 92mm increase in total wheelbase helps here. Particularly impressive is shoulder room, though, as with rival superminis, that's not enough to make this bench in any way really suitable for the transport of three adults. And out back? Well, it's mostly all good news. Avoid entry-level trim and you'll get an adjustable-height floor that can be re-positioned at a lower level if you've taller loads to carry. In terms of overall boot size, we're talking 355-litres, which is a massive 75-litres more than the MK5 model and 63-litres larger than the trunk you get in a rival Ford Fiesta.

Refer to Car & Driving for an exact up-to-date valuation section. <a href="mailto:info@caranddriving.com&subject=Used Car Price Request: Volkswagen Polo [AW/BZ] (2018 - 2020)">Click here</a> and we will email it to you.

As with any supermini, check for interior child damage. Check the alloy wheels for scratches. And look for signs of accident damage such as uneven panel gaps. Also look for any parking damage, such as scuffs to bumpers and kerbed wheels, because only the higher-spec versions were fitted with front and rear parking sensors. With the entry-level S model, remember that you won't be able to connect your smartphone to the infotainment system because it lacks the App Connect option, so try and stretch to a better specced variant if that's an issue. There were various manufacturer recalls you should know about. Certain Polos made between May 2017 and October 2018 were subject to a recall that relates to a design flaw with the rear seatbelts. On cars made in October 2017, the travel in the handbrake might increase due to the adjuster working loose. With Polos made between October 2019 and February 2020, there's a risk that oil may get into the brake servo, so the whole system will need to be checked over by a VW technician in case there's oil in the system. Make sure that all these recalls have been attended to if the model you're looking at has been affected.

We were told that this sixth generation Polo would ride like a much larger car and sure enough it does, easily shrugging off pock-marked urban surfaces. The sophistication that delivers this showing doesn't lie in intricate suspension design but in the light, stiff MQB A0 chassis that this MK6 model shares with other Volkswagen Group superminis like SEAT fifth generation Ibiza. Through the corners, this Polo isn't quite as agile as its Spanish cousin or a rival Ford Fiesta - the rather light steering doesn't deliver a huge amount in terms of meaningful feedback - but body movements are well controlled and wider tracks deliver plenty of front end grip. As for engines, well almost all buyers in our market want this Polo with petrol power - specifically the 999cc three cylinder unit that in this period featured in so many compact Volkswagen Group models. At the foot of the range, it appears in the normally aspirated MPI form, with either 65PS or 75PS. A better option though, if you can stretch to it, is the turbocharged TSI version of this unit, available with either 95PS and a 5-speed gearbox or 115PS and a 6-speed gearbox. DSG auto transmission was also offered to TSI customers - and to those who chose the other perkier petrol options, a 150PS 1.5 TSI EVO powerplant and the 200PS 2.0-litre engine fitted to the flagship GTI hot hatch model. Two minority-interest 1.6-litre TDI diesel variants, developing either 80PS or 95PS, were also available. Even the 1.0-litre petrol unit can deliver diesel levels of economy though, the 65PS MPI version capable of 60.1mpg on the combined cycle and 108g/km (both NEDC figures).

So, where does all that leave us? Well, in one of those situations where everything changed - but nothing was really very different. This sixth generation Polo proved to be a big step on from its predecessor in just about every area you could name. But if you want one, the reasons why will probably be much as they've always been with this car: it feels a quality cut above its rivals. The quality element in question though, moved forward quite significantly with this 'AW/BZ' MK6 model, which might make quite a difference if you're one of those buyers who's been waiting for an excuse to buy a smaller car, but has yet to come across one with the kind of sophistication and technology found in something larger. If so, this sixth generation Polo might well be the model that finally persuades you to downsize. It feels more refined, more premium and more mature than any supermini we've previously driven. The result might be little more than a shrunken Golf, but then that's exactly what most buyers want. Indeed, you could choose one over that larger family hatch and really not lose out very much in terms of practicality, drive dynamics or even the style statement you'll make on the high street. Ah yes, the 'style statement' some versions of this sixth generation model try to make. There's probably a place for it, but plenty of rivals do the trendy lifestyle vibe a lot less self-consciously. Ultimately, the typical Polo person doesn't really buy this Volkswagen in order to make a fashion statement. Which is why he or she will almost certainly end up with the kind of conservatively-finished variant we've been trying here. That conservative mindset extends into the issue of drive dynamics too, so it probably won't matter that a handful of rivals feel more engaging than this one through the corners. Of greater importance to likely buyers is that few of these competitors will be more comfortable in day to day use. At the end of the day, there's much to be said for an extra touch of quality and class. Seek those as your priorities and you'll find this little supermini more than happy to oblige.